#TEAMVIRUNGA, Virunga needs you! Help the park raise $1 million for the families of fallen rangers #TeamVirunga! We’re really excited to share the news that Virunga National Park will be taking part in the London Marathon 2017. Less than three years after the park's Director, Emmanuel de Merode, was shot in an assassination attempt (just days before the world premiere of Virunga: The Movie), he is gearing up to run 26 miles through the UK’s capital with the aim of raising $1 million for Virunga.

In a recent blog explaining his motivations for taking part in the marathon, Emmanuel said: “It was just three years ago that I was left fighting for my life when I was ambushed and shot returning to the park headquarters. I was extremely lucky to have survived, and to be able to resume my work for Virunga within a matter of weeks. The incident could have ended very differently. In fact, over 150 of my colleagues have lost their lives protecting Virunga. This loss is something I carry with me every day, and I run this marathon in dedication to the memory of rangers and staff that are no longer with us.” 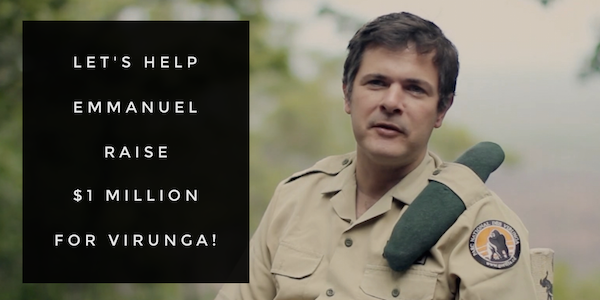 WATCH: Emmanuel shares why he is running Virgin Money London Marathon for Virunga


This is an ambitious aim, but it’s for an amazing cause. The park is looking to start an endowment fund that will help to secure the future of Virunga for years to come. The fund will support the widows and families of those rangers who have lost their lives in the fight to defend the park.

Together we can help Virunga secure it's future for decades to come. It has also been announced that every donation made to the marathon appeal will be matched! This means that:

For those in the USA, you can make a tax deductible donation via the Virunga National Park websitehttps://virunga.org/donate/. Those in UK and rest of world can make a donation via Virgin Money Giving, and if you’re a UK taxpayer, this will mean that for every £1 you donate, an extra 25p will be given to the park.

There’s never been a better chance for your donation to the park to go so far. Together we can reach this amazing goal!